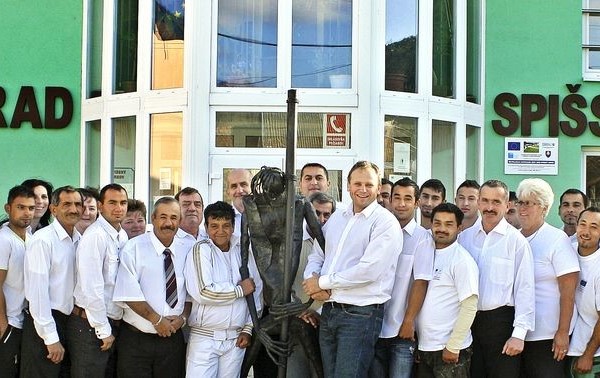 An integration project in a village in eastern Slovakia, Spišský Hrhov, is a success story of Roma inclusion. It sets an example for policy-making and strategic targeting of funding for both the EU and other Member States. The EU urgently has to achieve higher value for money in future integration efforts.

The Roma minority of 10-12 million people is the largest minority in the European Union.  Roma integration can be considered a development problem within the developed countries due to their very low socioeconomic conditions. The European Union embarked 1,5 billion euros to co-finance Roma integration during the 2014-2020 programming period. Specifically, the new Member States tend to rely greatly on financial resources and recommendations from the EU.

According to the Atlas of Roma Communities, the housing conditions of Roma in Slovakia have slightly improved. However, most projects give little consideration to local conditions and focus on single policy issues such as health or education. Projects act as a patch, but actually do not produce tangible results. The life expectancy of the Roma minority is still 10 years lower than the national average; the average fertility rate in segregated communities is more than 4 children per women; 7, 2% of Roma settlements do not have access to drinking water and the unemployment rate reaches striking 70 %!

The bright exception is the on-going Programme of Economic and Social Development in Spišský Hrhov led by the major Vladimir Ledecky. Since 1998, when the project officially begun, it has been able to target multiple layers of discrimination which aggravate prospects of lifting poverty, health problems, low level of education and employment prospects.

The city set up a Municipal Social Enterprise to address employment and housing issues. It started off as a construction company and employed the Roma minority exclusively. Public employment aimed to counter the reluctance of private businesses to hire Roma. As the business flourished, the company expanded the volume of the construction projects, primarily focused on the improvement of local housing. Consequently, the unemployment rate of Roma minority fell from almost 100% to astonishing 20%. Moreover, the illegal, unsafe and unsanitary settlements have been transformed into secure brick homes with water and electricity supply. The local ownership of the project is particularly critical as it provides a sense of value and meaningful employment. In other housing projects in Slovakia, new flats were often destroyed shortly after they had been constructed.

Since 2012, Roma-related education and integration have dominated EU’s country-specific recommendations to Slovakia. The most adverse problems concerning Roma education are the low school attendance and their segregation to special school for mentally less developed children. They are often automatically placed in these schools despite having a diagnosed condition, which further restricts the child’s ability to pursue an education at the high-school level. Free supplies and meals in many integration projects act as an ineffective, quick fixes. In Spišský Hrhov, the Roma children are no longer segregated, the attendance and the average level of education obtained considerably improved. The improvement of the education level of Roma minority greatly depends on the parents’ status and mindset regarding their children’s education. Employed parents take children’s education more seriously and responsibly than unemployed. The fact that the employment rate in Spišský Hrhov considerably improved helps. In addition to that, the older children may see that there is a future value in pursuing a higher qualification. Additionally, the community centre, established by a joint effort of the local administration and activists, further supports the language preparation at the nursery school, offers leisure activities and health classes for both children and adults. What makes Spišský Hrhov so distinctive is their holistic approach to education.

Even though each community has different problems and needs, the success story of Roma integration in Spišský Hrhov provides a glistering example for future projects. The pro-active approach of the local administration and targeting of multiple layers of discrimination are pivotal for integrating the Roma minority effectively as well as to get the highest value for the money invested. The education of the Roma minority cannot be advanced without proper consideration of their living conditions. Their health cannot be improved without safe housing. And similarly, the employability cannot be enhanced without better qualifications and the overturn of discriminatory practices.