There are too many cars in Azerbaijan. It is essential to switch to bikes. 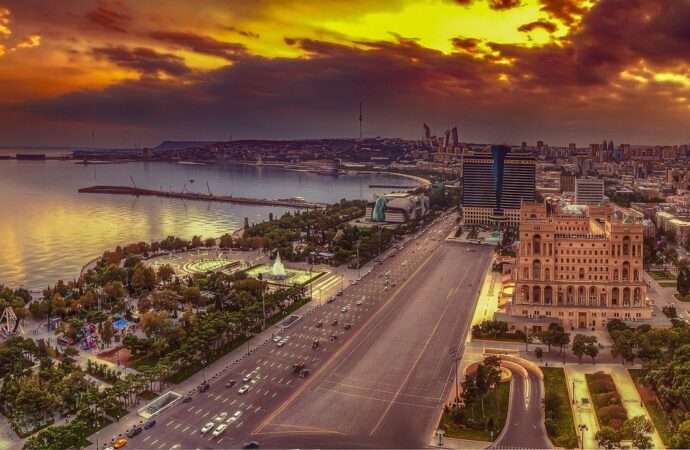 Statistically, every seventh person in Azerbaijan owns a car. Three out of four cars are driven in the capital, Baku. Are you not fed up with a habitual picture of omnipresent cars forming jams with noise and stress they produce? It is high time to launch the bike infrastructure in Azerbaijan.

In 2018 I was traveling through ex-Yugoslavia with my family. When we got back from our Bled-Ljubljana day trip, a cyclist almost crashed into me on our way back to hotel. I thought she would apologize. But instead, I heard her ironic fading shout: ”You are not alone in this world.” I looked around and realized that we were walking on a bike lane instead of the one designed for pedestrians. It was easy for me to confuse these two as I come from Azerbaijan, a country with cycling-UNfriendly roads.

Roads are full of cars and lack proper infrastructure for cycling. There are no bike lanes, roads, nor parking slots. Last year 2523 people, almost a hundred more compared to 2018, suffered in 1870 road accidents, One third of the injured died. Unfortunately, cyclists on the roads become victims too. On April 10th, in Mingachevir, a bit more 300 km westwards from Baku, a truck knocked down a cyclist riding his bike on a side lane to death. On April 18th, there was another truck-bicycle accident in Baku. It put an end to a teenager`s life.

We could have avoided these and many other fatalities if we had had proper bike infrastructure.

The number of cyclists, especially in the capital has gone up in the last few years. But it is still risky to bike to work and other places. Baku Transportation Agency (BTA) acknowledges both facts and announced their efforts to expand the cycling infrastructure. Last April the BTA announced their plans to pave 18 km bike lanes, roads designed for the city downtown in compliance with the relevant 2019-2023 state program. They checked almost seven km of the claimed distance and introduced a 100 m long pilot path on the Pushkin Street close to the seaside boulevard.

More than a year has passed but we have the same pilot path which is, according to cyclists, of poor quality, and just one residential complex with proper bike infrastructure. The special regime imposed by the government due to the COVID-19 outbreak provided a great opportunity to carry out promised works (fewer cars, social self-isolation) but they missed the chance.

Bike lanes, roads, and parking slots are a win-win solution for residents and the city authorities. Once the safe infrastructure is introduced, it will inspire commuters to switch to bikes when going to work or elsewhere, and the city authorities will have reputational and financial gains. As a result, this will improve the quality of lives of Baku’s citizens and make city and family budgets bigger. They can introduce bike-sharing in not so distant future as well as bicycle touring. Offering bikes for rent is a widespread practice in most European cities. It brings not only an eye-appealing multi-vehicle city landscape but revenues from renting bikes hourly or daily. It will give a push to small business enterprises to benefit from newly emerged domestic market.

Besides, cycling infrastructure is a cost-benefit factor and cycling makes society richer. In Denmark, one of the world`s leading cycling country, it is estimated that the cost-benefit gain of one kilometer cycled is € 0.64. And society saves at least € 1,34 per kilometer when people cycle rather than drive. Cycling can save money for families as well. In Almetyevsk, the most cycling-friendly Russian city with the population of almost 150000, if 10 % of drivers switch to bikes, their family budgets can save more than € 5 mln.

Using more bikes will curb the excessive extent of car purchases. There are 1.4 million cars nowadays in the country with the population of 10 million people i.e. every 100 families have 54 cars. Compared to 2000, we observe 14 fold (!) rise in car numbers. It inevitably leads to jams, stress, noise, deteriorating ecology. In her interview in 2017 the deputy director of the National Department of Environmental Monitoring of the Ministry of Ecology and Natural Resources Matanat Avazova said “in the 1990s, 70-80 percent of emissions came from industrial enterprises and 30 percent from vehicles, but nowadays it is vice versa.”

Good cycling infrastructure will improve the image of a bike as an eco-friendly vehicle, keep our city less polluted and us – fit and healthy. Due to its heavy industrial utilities, air quality in Baku is lower than the rest of the country. In the whole of Europe, the Azerbaijani capital comes last in the ranking list. This adds to the rising number of cardiovascular diseases. New research shows that poor air quality kills 5.5 million worldwide annually. While other research reveals that air pollution causes 29% deaths from lung cancer; 24%-from stroke;25%-from heart disease; 43%-from lung disease. It is worth to note that the more people cycle, the less they will spend on medical costs.

In post-Covid times it is highly beneficial to use bikes for social distancing. The government has recently introduced restrictions for commuters on public transportation. They varied from keeping certain distance while on a bus to fines for not wearing medical masks. But it won`t be effective as passengers are too many compared to controllers. Also, the former, especially on suburban buses, are usually reluctant to obey at regulations. A second wave of the COVID-19 is looming later in Autumn which is not comforting at all. It is no doubt a bicycle is a much safer vehicle than public transport where the risk of getting infected is much higher.

It is worthy to note European cities in current COVID-19 circumstances. For example, from May to September, city authorities in Milan are planning to equip the place with a new 35-kilometer bicycle infrastructure. In Brussels, cyclists will temporarily occupy the lanes of main streets of the city and speed limitations up to 20 km per hour for other vehicles will be applied. France also plans to provide a temporary access for cyclists on the lanes. Also, authorities want to spend 20 million euros to back cycling. Just in 2019, the country’s bicycle traffic went up by 54 percent.

Finally, once we have proper infrastructure, we will manage to change societal perception towards cycling, break stereotypes and clichés. Bikes are not only for kids as it is widely perceived by many old-fashioned thinking Azerbaijani parents. It is fine to bike no matter how old you are or what your sex is. In case more people, especially the youth, switch to bikes, owning a car will be less cool than it is today. Cyclists have to ride bikes elsewhere in the city reclaiming their deserved space from drivers. The latter prefer to arrogantly push them to sidewalks than to share roads. Drivers are not alone in the world just like me back then in Ljubljana. That is why bike lanes are essential.