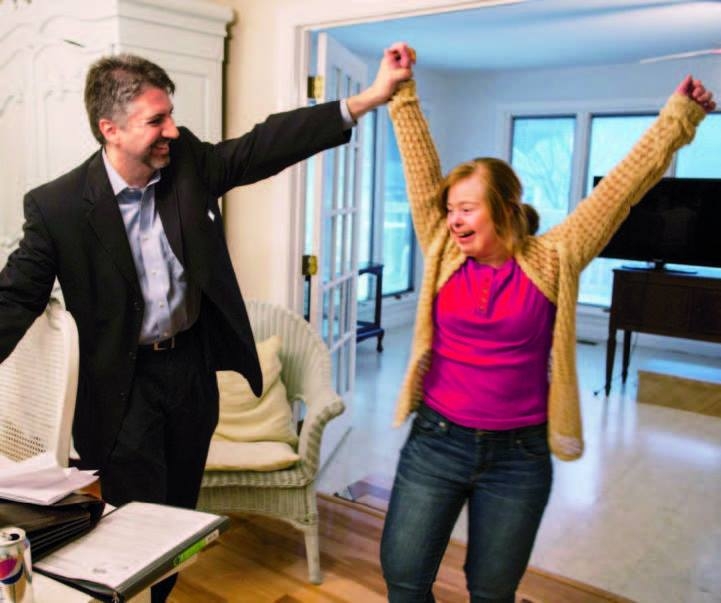 Autonomous decision making is still an elusive dream for a large number of Europeans with intellectual and psychosocial disabilities who are placed under guardianship. These people experience “civic death” as they can not make their life choices, get married, sign employment contracts, inherit and manage property, vote or choose the place of living.

When you are about to buy a used car, don’t you seek for an advice from your mechanic or consult your lawyer when it comes to legal matters? Everybody depends on support in important as well as less important decisions concerning different areas of life. Indeed this is obvious; we all need the knowledge and expertise of people around us because we do not have all the talent and skills relevant to make informed judgements. But ultimately and notwithstanding the advices we received, it’s us who make the decisions for ourselves and who run the risk of failing. The amount of advice or assistance may vary, but in reality we all make choices and decisions based on the supported decision making model.

However, autonomous decision making is still an elusive dream for a large number of Europeans with intellectual and psychosocial disabilities who are deprived of legal capacity and placed under guardianship whilst regarded incapable of taking decisions due to disability. As a consequence, people experience “civic death” as they can not make their life choices, get married, sign employment contracts, inherit and manage property, vote, choose the place of living, etc. EU does not have the competences to deal with specific questions related to the legal capacity of persons with disabilities as it is regulated by national legislation. Nevertheless, such practices should be abolished as it represents a form of discrimination on the ground of disability. The European Union has a clear competence to combat discrimination based on disability (Article 10 TFEU) and to adopt legislation to combat such discrimination (Article 19 TFEU). Equal recognition before the law and issues of legal capacity fall directly within this competence as persons with disabilities are often being denied or restricted their legal capacity on the basis of disability. This means that States must not deny legal capacity to people with intellectual or psychosocial disabilities, but instead  “provide access by persons with disabilities to the support they may require in exercising their legal capacity” (CRPD Article 12 (3)).

In the guardianship system, the guardian makes the decisions on behalf of the person with disability. Guardians are usually appointed by a court or other authority, and can represent either a social welfare centre or the guardianship authority.  Supported decision making means that the person himself/herself makes the decision. Instead of making decisions in the name of the person, supporters assist the person to reach and communicate his/her own decisions. Guardianship systems often lack appropriate safeguards to ensure that decisions of a guardian coincide with the adult’s wishes. Only in those cases where people with disabilities require highly intensive support should measures be taken related to the exercise of legal capacity, which must be subject to regular review by a competent, independent and impartial authority or judicial body. It should be noted that highly intensive support does not mean substituted decision-making in any case.

Supported decision-making, on the other hand, is based on the free agreement of the adult and supporters. In other words, supported decision making consists of a voluntary relationship between the person and his or her supporters. While professional guardians are paid for their job, in supported decision-making systems supporters should be independent from service-delivery professionals. They are usually unpaid and could include friends, family, or members of the local community. Any decision made by a substitute decision-maker is based on what is believed to be in the objective “best interests” of the person concerned, as opposed to being based on the person’s own will and preferences.

This is in line with Article 12 of the Committee on the Rights of Persons with Disabilities (CRPD), which manifests a vivid departure from protection and segregation to choice, dignity and autonomy – part of the move from a medical model to the social model of disability.  This article stipulates that persons with disabilities have a right to legal capacity, which means that the law should recognise their capacity to act and to be the bearers of rights. The concept of supported decision-making contains two components which arise from Article 12 of the CRPD: (1) Everyone has the right to make their own decisions – known as autonomous decision-making, and (2) Everyone has the right to receive adequate support to do so – known as supported decision-making.

States should reform legal capacity legislation and put in place support systems which would enable persons with disabilities to fully exercise their rights and make their life choices. The abuses of guardianship and its restrictive-pervasive features have urged reforms. However, the alternatives to deprivation of legal capacity still remains unclear to decision-makers and the need for further clarification of the supported decision making principle adheres. ‘Support’ is a broad term that encompasses both informal and formal support arrangements, of varying types and intensity. For example, persons with disabilities may choose one or more trusted support persons to assist them in exercising their legal capacity for certain types of decisions, or may call on other forms of support, such as peer support, family member support, self-advocacy training, or assistance with communication. Support can also constitute the development and recognition of diverse, non-conventional methods of communication, especially for those who use non-verbal forms of communication to express their will and preferences.

Supported decision making must be available to all and not be limited to some. Furthermore, all forms of support should be based on the will and preferences of the person, not on his/her presumed best interests. Efficient provisions should also entail legal recognition of the chosen support person(s). Last but not least, the support person should be regularly evaluated, leaving the person with disabilities the right to terminate or alter the relationship at any time.

EU Member States and accession countries desperately lack reforms in their legal capacity systems in line with the UN CRPD provision and to abolish the “civic death’’ penalty as outdated and unnecessary restrictive measure of legal capacity deprivation. EU should issue recommendations to Member States regarding the implementation of EU legislation on access to justice, access to good services in line with Article 12 CRPD and on ending discrimination on the basis of disability.

Finally as the Commissioner for Human Rights of Council of Europe stated: “Independence and personal autonomy is not about being able to do everything on your own, but about having control of your life and the possibility to make decisions and have them respected by others.”