TTIP: Solution looking for a problem 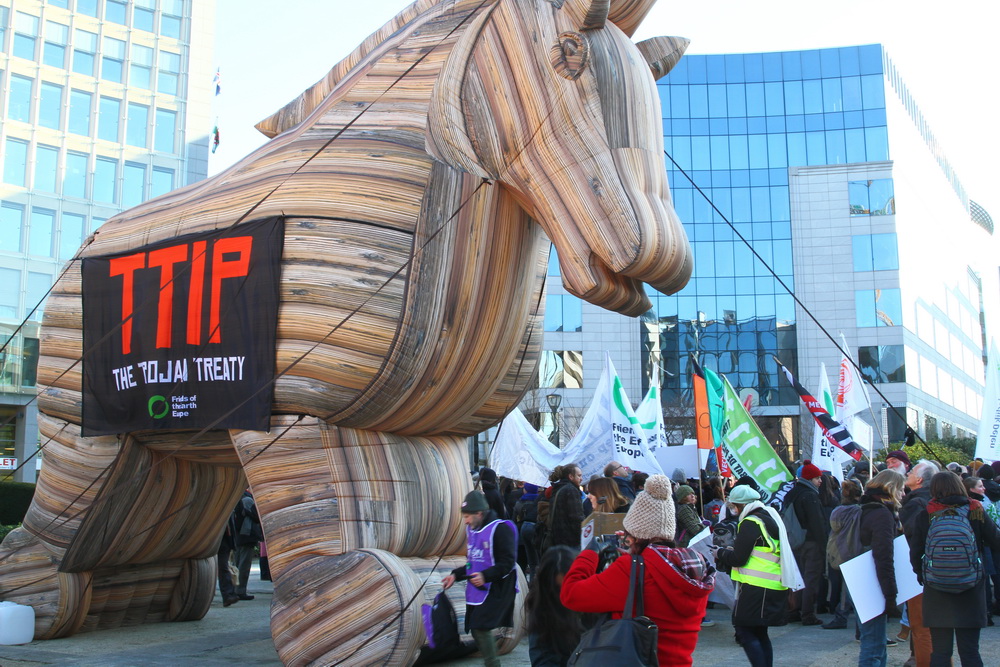 Being designed to promote trade and multilateral economic growth, the Transatlantic Trade and Investment Partnership (TTIP) is a proposed trade agreement between the United States and the European Union. In its essence, the agreement aims to boost the trade by removing trade barriers as well as to expand corporate profits through the standardization of the legal regulations in the US and EU.

The agreement is currently at the stage of negotiations and its content is only available to politicians, negotiators, and big corporations, whereas the public is not allowed to read it – as if it is the matter of top secret. Clearly, one can expect that omission of the public when drafting this document would not go unnoticed by the latter, especially inside the EU. In April this year 248 negotiations pages were leaked to the public and revealed by Greenpeace.

If adopted and implemented this agreement could jeopardize the environment and the lives of more than 800 million citizens. Huge implications related to food, animal welfare, and climate change could emerge. TTIP might bring hormone-treated meat, chlorinated chicken, cloned cattle and other types of genetic engineering measures to EU citizens – all of which today forbidden in Europe.

We should also take into consideration that certain groups of standards differ between the two sides of the Atlantic. At the moment the EU does not allow imports of the US meat from animals that have been treated with growth hormones because this practice has been linked to health concerns. Apart from the fact that it is normally used for the toilet cleaning, the chlorine given to the chicken in the US is a well known carcinogen. In the US meat is also often treated with antibacterial substances, which have adverse health and environmental impacts and the animal industry is more focused on the end product, while the emphasis in the old continent is more on the animal welfare. It is also evident that the EU approach might be too conservative for the US standards: in Europe precautionary principles are applied– which guarantee that a certain product is safe before entering the market, while in the US products are the matter of concern only when a problem occurs. Given the fact that the US agriculture industry perceives EU standards as major obstacles to free trade, it can be deduced that the TTIP could potentially allow more genetically modified food into Europe.

Next to the food safety concerns, another problem is that climate change has been left out of this agreement. Leaked documents revealed that there is nothing related to this matter in the draft yet. As Greenpeace reports, mitigation measures in the agreement are limited by provisions of the chapter on Regulatory Cooperation and Market Access for Industrial goods. In that case the import of CO2 intensive fuels, such as oil from Tar Sands, could be deregulated, which would then hold back future efforts to fight the climate change, as well as to conserve our environment.

Besides the previously mentioned, another great concern regarding this agreement is that it gives foreign corporations the right to directly challenge governments and sue them over laws and policies that are designed to protect the environment, food safety and health standards. The idea that a corporate system is creating a compulsory (unappealable!) authority – Investor-State Dispute Settlements – to overturn democratically adopted rules should concern everyone. However, whether these public concerns and NGO’s scrutiny are enough to induce positive changes or not – the time will show. Certainly, the agreement will only survive if the principles of fairness, accountability, and respect for democracy are satisfied.

In the end, it seems that TTIP might not be such a great idea in the long term, at least not from the environmental and food safety standpoint, and especially not for European citizens. It should be crucial for both parties to proceed in a way that would ensure harmonization of standards that better regulate and protect the global environment. The negotiations are still ongoing, and the pressure from the public is continuously growing. As transparency in the case of TTIP is a major issue, it is important to push for publicizing official proposals from both sides – the US ones are still kept secret. In addition, careful and inclusive reviewing, with enough time for general public to provide adequate assessment should be the priority at this point. This could also increase the quality of the future agreement once it is finalized. However, the solution that majority of activists would probably prefer the most, would be to stop this agreement – like they did in the past with the Multilateral Agreement on Investment.

If the current situation regarding the TTIP does not change it is evident that our lives, health and environment are at stake. The agreement is seen as a comprehensive solution aiming to foster trade between the EU and US, as well as to harmonize regulations on trade and investment, however it might end up creating more problems than solving, which is not acceptable in the current EU setting. That’s why it really seems like the solution is looking for a problem here.