“In the second round we will take our country back” 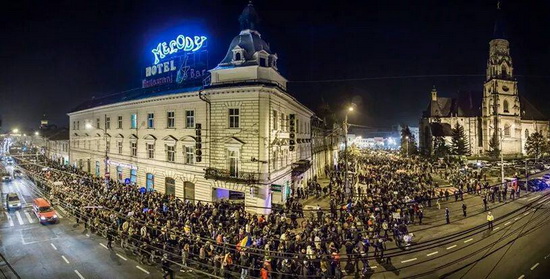 The mandate of the Romanian president Traian Băsescu will end this December, so a first round of new presidential elections was scheduled for November 2nd. Shortly before the elections it was clear that there will be a second round, as none of the 14 candidates would have managed to obtain 50% of the votes.

.The first two favourites for victory were, in the order of several survey results, the Prime Minister, Victor Ponta (supported by the Social Democratic Party and generally by the Left Wing politicians), and the mayor of the Transylvanian city of Sibiu, Klaus Iohannis (supported by the Cristian-Liberal Alliance, composed from the main Right-Wing parties: the Liberal-Democrat Party and the party he was leading, the National-Liberal Party). The electoral campaign started one month before the elections proved to be extremely dirty, some say the dirtiest campaign from the post-communist era. As expected, the first round announced victorious and qualified in the second round of the elections Victor Ponta and Klaus Iohannis. However the elections on November 2nd proved to be very problematic.

In the main academic centres of Romania there were voting stations in the campuses, for students. And as issued by the Government some weeks before, everyone who was not a permanent resident in the locality where  they would vote, could fill in and sign a form declaring that they hadn’t been voting that day and they will not be voting again in some other place. However in the student campuses the voting stations soon ran out of these declarations so that hundreds or thousands of students across the country could not vote. Until the problem was solved it was already too late for all of them to be able to vote till the closing time.

Abroad the situation was worse. In many European countries, such as France, UK, Germany, Spain, Italy and not only (the main destinations for the Romanian immigrants, countries with thousands of Romanian residents) the Romanian Government organized only too few voting facilities at the embassies and other Romanian institutions abroad, so from as early as noon in Munich there was already a very long queue of roughly 1000 people, as well as in cities like London, Paris, Rome, Madrid and so on. By 7 PM the queues were much longer, people could hardly get to vote and those who managed reported that the process was going terribly and unnaturally slow. If there were 5 voting booths and 3 stamps available, there were only one or two persons admitted at once, who would have had to fill in and sign the aforementioned declaration and then to vote. At 9 PM, the official closing time of the voting stations, thousands of people were still standing outside waiting to vote. These crowds started protesting right away against what everyone considered a deliberate hindering of the right to vote. The Government blamed the Central Electoral Bureau (in Romanian BEC), which in turn proved that it was the duty of the Ministry of Foreign Affairs (at that time lead by Titus Corlatean, member of the same party as Victor Ponta) to organize the elections abroad.

In solidarity with the protests abroad, on the very same evening of November 2nd small scale protests broke up spontaneously in some of the main cities of Romania, such as Bucharest, Cluj-Napoca and Timisoara. On Facebook people were becoming angry and probably the network recorded one of the most intense activity on the Romanian servers in a long time. I received the invitation to join an event announcing nationwide protests on November 14th. However, although people were raging about the unacceptable situation in diaspora, nobody came with concrete proposals for protests. This being the state of events I and a friend of mine from Timisoara decided to make the first step and to create Facebook events for protests in Cluj, my hometown, and in Timisoara respectively, where he lives. Other people took the initiative in other cities as well so that protests were now being scheduled in about 10 cities across Romania.

In the first 24 hours from initiating the event page for the protest in Cluj over 2500 people joined in. In the meantime we decided to organize another protest earlier, on November 8th. By the day of the protest 10,500 people said they will come and other few thousands were pondering. Since I was studying in Budapest, 4 young people from Cluj offered their help in obtaining the authorization for the protest and prepare everything to make it legal. By the time I got home things were almost ready. In the end the protest gathered between 5,000 and 10,000 people in Cluj only, in Timisoara close to 5,000 and other few thousands in other cities. Even in the town of Craiova, in Southern Romania, an area who voted massively for Victor Ponta, a few hundred people went out on the streets.

The echo in the Romanian press was large, both positive and negative, and some TV channels[1] openly supporting the Prime Minister started to accuse the organizers of the protests of anything they could find. I was accused several times by the media supporting Victor Ponta of separatism and entanglement with the Hungarian extremists, starting from the fact that I am studying in Budapest (regardless of the fact that it is an international University) and I have personal political views which are not in agreement with the Romanian centralization. My friend from Timisoara was accused of being a Nazi for posting on his Facebook page pictures with Norwegian reenactors representing Viking soldiers, some of them having historical Viking symbols (some of which resembled the Swastika, although having no connection to it). For fear of having troubles at the university I had to back down, not before someone else decided to go on with our protest and organize another one on November 14th. That one was even bigger, with around 12,000 people in Cluj alone. The organizing team igniting one of the thousands sky lanterns

The result of the elections also raised some problems. In the regions of Transylvania and Banat people voted massively for Klaus Iohannis, while the rest of the country, i.e. Moldavia and Wallachia, voted strongly for Victor Ponta. This raised serious questions which ranged from difference in lifestyle and education to regional identities and even claims for autonomy. In addition, some officials from the Social Democratic Party insinuated that the difference would be a “problem” that they will have to “solve” (in their favour, of course), and that these regions would be “problematic”, everything said in a pejorative way and often with disregard to decency. These accusations were sometimes connected to the regional identities showed by some and in one instance people having the historical Transylvanian flag at the protests were accused of separatism. This happened a few weeks after Victor Ponta was photographed with the historical Moldavian flag during his electoral campaign… In addition to all this, the electoral campaign has been marked by fierce attacks (some profound discriminatory) towards the Right-wing candidate, who in return answered with silence. Another scandal was the fact that the Romanian Orthodox Church received thousands of Euros from the State Budget prior to the elections, and during the campaign it openly supported Victor Ponta, including in the churches, during the Holy Mass. Thus not only that the sympathy for the Orthodox Church decreased drastically in some areas of the country but many people accused the Church of involving unacceptably much in politics besides having the most profitable businesses in the country without paying taxes whatsoever.

Following the massive protests in Romania and abroad, the minister of foreign affairs resigned, and in his place was named Theodor Meleșcanu, with low public support. People were asking for changes in the organization of the elections abroad and the resignation of the entire Cabinet. The second round of elections, organized on November 16th, proved to have nothing changed from the side of the Government. Romanians abroad went this time in greater number from the first hour of the day, hoping to get the chance to vote. Some with chairs, sandwiches and coffees, some with small children along. Exactly like in the late communist Romania when you had to stay a few hours in line to be able to buy rationalized food. Some people declared to the press that the current Government reminded them the reason why they had to emigrate. In Romania the protests continued on the 15th and even on the 16th of November. According to the statistics the presence at vote increased in the second round to 62.04% in comparison to 52.31% in the first round. Some people explained that this was the result of a very good mobilization of the civil society, from the social platforms on the internet to the massive protests throughout the country. The result was a clear victory for Klaus Iohannis with 54.43% from the validated votes. The protests continued at a much lower scale in some cities requesting the resignation of the Prime Minister and the entire Cabinet. The minister of foreign affairs resigned after less than a week in office and Victor Ponta left the country “for a one-week vacation”, as he declared, to rest (he was allegedly seen in one of the following days in one of the most expensive clubs in Abu-Dhabi). In the meantime the newly elected president, even if he is yet to receive the prerogatives until the last president’s mandate will end, in December, asked the Parliament to reject a very controversial legislative initiative for amnesty, formulated by a member of the Socialist Democratic Party and supported by this political faction. The Parliament rejected it and lifted the parliamentary immunity for 5 politicians accused of corruption, who were immediately arrested. In the same week the National Anticorruption Authority started investigating other few hundred cases and recently they declared that they are working at over 4,000 prosecution files for corruption, including important Romanian politicians. In addition, before being obliged to leave the party he is now leading (as the Constitution states for the newly elected president), Klaus Iohannis commenced a “purge” in the National Liberal Party, excluding all the members who are convicted of corruption and requesting to all those who are under investigation to withdraw from the first line of politics until a verdict is given. A new start for Romania?

Following this outcome the Romanian civil society is having high hopes from the new president. Statistics show that the confidence in the presidency and the Parliament increased significantly and people are awaiting for all the reformations Klaus Iohannis had promised (including a smaller parliament and the reformation of the political class). Victor Ponta declared that he will not resign from the position of Prime Minister unless his Party colleagues require it. Their party itself is now shaken because of the defeat and the corruption files opened against important members.

It might be worth mentioning that Klaus Iohannis is the first Transylvanian president of Romania since the abolition of the monarchy in 1947, and many people see it as a good omen for the country. Angela Merkel, who had allegedly supported him in the electoral campaign, congratulated him for the victory, along with King Michael of Romania. The situation has not yet become calm, corruption prosecutions are on the roll, the Prime Minister is still in office and people request for his resignation, and the newly elected president hasn’t yet begun his mandate. People are still willing to go out on the streets if things will not improve and there are hopes that the civil society has awaken for good and will claim its rights when they are breached.

[1] Same channels that were legitimately accused of making campaign in favour of Victor Ponta one day before the first round of elections and during the voting day, which is illegal.