Politheor’s Special Report on the Future of the European Project 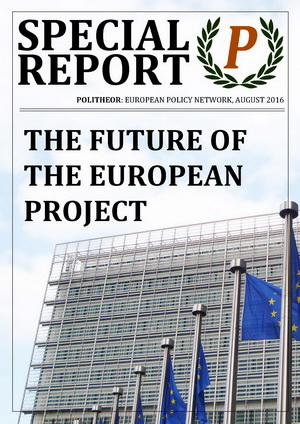 A crisis-ridden EU has sparked many debates. Is the EU becoming more intergovernmental? Should it integrate more deeply (with a fiscal union)? Is disintegration or policy dismantling a real concern?

“Many thought the EU was finished after Brexit but that is not the case,” said Italy’s prime minister Matteo Renzi during a joint press conference with his French and German counterparts on the Italian aircraft carrier Garibaldi. This symbolic meeting on the 22nd of August 2016 was a prelude of sorts ahead of the informal EU summit in Bratislava in September this year. Reassuring the rest of the club that EU’s disintegration is out of question is the least this trio could have done after a shocking decision by the Britons to leave the EU. But the future is uncertain, and even the most opinionated pundits hesitate to predict anything with certitude. Still, nearly everyone agrees – the European project needs a revamp, one way or the other.

A crisis-ridden EU has sparked many debates. Is the EU becoming more intergovernmental? Should it integrate more deeply (with a fiscal union)? Is disintegration or policy dismantling a real concern? These are only some of the questions frequently asked. More or less Europe, better or worse Europe – the outcome might ultimately boil down to two factors. On the one hand, it will depend on the ability of European leaders to continue fostering a consensus-generating culture (which has been seriously undermined by the refugee crisis). On the other hand, this time the architects of the future must not forget to actively include citizens in the process. At the end of the day, the only thing that could be said about the EU with a fair amount of certainty is that – it will reform. It always has been reforming and it most likely would have continued to, regardless of the Brexit. Take the Five Presidents’ Report or last years’ Macron-Gabriel sketch to further integration as cases in point.

The purpose of this Special Report is to imagine an EU of tomorrow. In front, you will find 9 op-ed contributions grouped into two thematic blocks – one group of op-eds considers the fate of individual policies and policy areas, whereas the other debates how democracy in the EU should be envisaged. Flanked by the block of op-eds on individual policy areas and EU democracy generally, two interviews – one with Professor Thomas Straubhaar from the University of Hamburg and the other with Professor Piers Ludlow from the London School of Economics (LSE) will talk over the general course of European integration post Brexit.