Bread and games and evictions 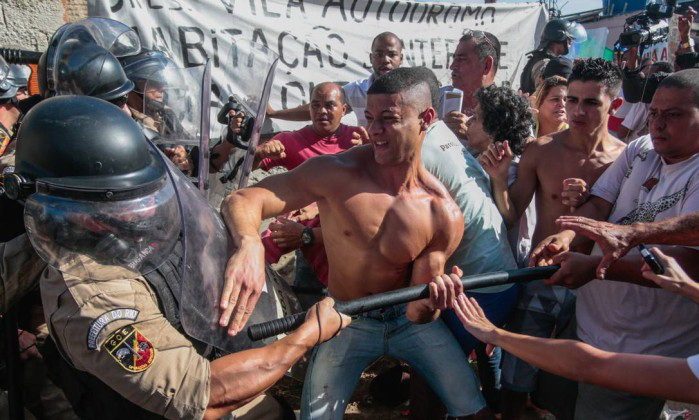 The defeat of the Brazilian team at the hands (feet?) of the German Mannschaft two years ago is etched in our collective minds. The match – though remarkable – had little to do with that. What stuck was the reaction of the public and the images of heartbroken football fans that went around the globe. They showed a nation that had betted a lot on football – and lost.

The B in BRICS paints a rosy picture for the country’s future. Yet the 2014 World Championship had been preceded by violent demonstrations in over a hundred Brazilian cities. The “Our Cup is on the streets” protests opposed the corruption and evictions that went hand in hand with the games.

“The World Cup steals money from healthcare, education and the poor. The homeless are being forced from the streets. This is not for Brazil, it’s for the tourists,” a woman told the Guardian.

But it is. The Romanesque panem et circenses of the World Championship are – much like Olympic games – a hallmark event for nation-builders. A medal count is perceived as a probate indication of the performance of a nation as a whole. And when a national team wins a game, its people shares in the victory as if it will suffer the same cramps the next day.

Yes, bread and circuses might have gone a long way. However: with the evictions and ridiculous spending on stadiums, the country actually took away from the bread to heed the circus. And with its embarrassing defeat, the country lost its circus too.

Today, two years later, the games are returning to Brazil in much the same circumstances.

Despite declining income equality, Brazil still ranks 17th in the in the GINI index: that means that its richest 10 percent hold more than 42 percent of country’s resources while the poorest 34 percent receive but a 1.2 percent share. In the world’s 5th most populated country those 34 percent amount to nearly 70 million people, 44 million of which still live below the poverty line.

Many of them are housed in the same favelas that have to make way for the games. In the eye of a particularly bad storm: Vila Autódromo. When Olympics preparations began in 2009, this favela west of Rio de Janeiro found itself squarely in the way of a planned road to the Olympic park. Its residents were not eager to leave.

Residents who did, complained of false promises about the complex they were relocated to. Those who stayed longer, complained of psychologic pressure – trees were cut down, garbage left out, electricity frequently interrupted – while others were removed forcibly. Only those who resisted long enough – becoming no less than a full-fledged, mediatized symbol of resistance – got the authorities’ reluctant support to stay.

Brazil has been focusing on image – as much as actual state building – as any country probably should.

But Brazil’s image building has not only taken precedence, it has actually been chipping away at the very foundation of the state, closing a very vicious circle that starts with a weak state and ends up with a weaker one. It is time Brazil looked beyond the circus to the needs of its own people.

The 2014 World Championship Football protests were a sign not to forgo peoples’ needs to cater to their minds. The country’s reputation might be on steadier grounds when all of its people – not just its athletes – can back it.