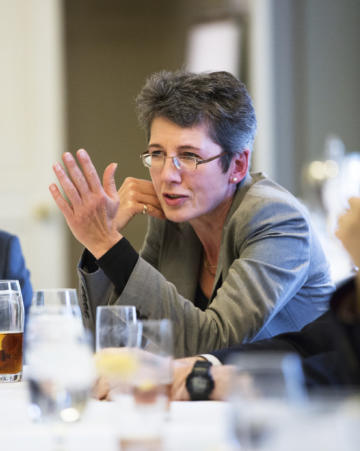 Joseph Stiglitz can certainly not be counted among the friends of the Euro. His new book, The Euro and Its Threat to the Future of Europe, provides ammunition for Eurosceptics, on whichever side of the political spectrum: a harsh critique of the Single Currency, unrealistic policy proposals on how to save it (e.g. a fiscal federation), the conclusion that an “amicable divorce” would be best. In this interview, Waltraud Schelkle, Associate Professor in Political Economy at the European Institute, London School of Economics and Political Science, provides an alternative read of the euro area crisis.

FC: In an interview about his new book, Stiglitz claims, “under the current course, the cost of keeping the Eurozone together probably exceeds the cost of breaking it up”. Would you agree?

WS: I find it impossible to make such a statement. There are so many scenarios, that there is no basis on which one can compute the cost of keeping the Euro area together and compare it to the cost of breaking it up.

Besides, there is an interest in keeping the present system: even when people have strong reservations against the European crisis management, they don’t want to break up the euro area. This should be the starting point for academics researching what to do next.

Have extraordinary monetary policies made any difference as to the alleged costs of being in the Euro?

I would say extraordinary monetary policies were actually benefits of Euro area membership. By expanding its liquidity and operating a cross-border payments system, the ECB has managed to keep a financial crisis from turning into a sudden stop of trade finance. It provided funds to all banks. This was most valuable to peripheral banks. But it could not prevent more capital flowing to countries that didn’t need it, like Germany who has now negative interest rates and could use more fiscal space to boost internal demand.

The protection provided by the ECB was in part a reason for joining the club: different Baltic countries became members during the crisis – Estonia in 2011, Latvia in 2014 and Lithuania in 2015.

You have dedicated an insightful paper to the Theory of Optimal Currency Areas (OCA), concluding that it is wrongly assumed to be the paradigm to follow for a better Eurozone. Could you please remind our readers what your main points were?

OCA theory says that countries have to be similar in specific respects before a monetary union can work.

In that sense, there is hardly any optimal currency area – certainly not the United States to which the Eurozone is often compared.

It is wrong to assume that similarity is necessary. Diversity can be of mutual advantage. If we consider a monetary union as a particular way of sharing certain risks – in particular financial risks – by removing the exchange rate and operating a cross-border payment system, then the idea of insurance entails that a diverse risk pool is preferable, so that members are not equally affected by a common shock and the lucky can help the unlucky and the lucky and the unlucky are not always the same.

However, risk-sharing mechanisms have to be built up and there yes, the United States has developed them to a greater extent than the Eurozone. The latter has some, which were not even created to be insurance mechanisms. For one, the cross-border payment system, but also others, which I talk about in a book that will soon be published. But it is not enough. In the face of the crisis, Euro area members suffered both a lack of instruments to adjust against shocks and a lack of insurance stemming from sharing the currency. Thus the weakest countries fell victim to financial markets and more or less self-fulfilling crises. We can discuss whether, in the case of Greece, it had to happen, as De Grauwe and Ji in their insightful paper argue.

If insurance mechanisms are missing, OCA theory cannot be of much use, as it does not provide any indication as to what one could do about the currency area as a whole; it is always a problem of individual countries that do not adjust properly.

[boFrom the banking union to fully-fledged fiscal federalism. In your view, what are not only the boldest, but also the most feasible, projects that would make the Euro work?

Well, most people would say we need a central budget at the EU level. While it would be a major insurance mechanism, it is a step too far, not only politically, but also economically. Something less centralized than fiscal federalism could be done.

I think two things are really necessary. First, targeted fiscal backstops. In particular, with reference to the banking union, the resolution mechanism needs a joint debt instrument as a backup when the next shock hits the Eurozone. Indeed, there is diabolic loop whereby a weak banking system has to be bailed out by the government, the government is then over-indebted, its bonds are written down and the banks that hold those government bonds are also in trouble. A joint debt instrument would break the loop. Also, a fiscal backstop would help the European Stability Mechanism, by providing a joint guarantee for government bonds. In sum, targeted fiscal backstops would help against bankruptcy and sovereign insolvency.

Second, international law for sovereign default. Some countries do have too high debt levels and will labor under these debt burdens for a long time if they are not reduced in a discretionary fashion. Having said that, the losses will also hurt people that are not well-off, for instance pensioners who hold government bonds directly or indirectly through their pension funds.

I am afraid not. The Fiscal Compact is a case in point. Even officials in the Commission don’t believe in fiscal discipline as the prime concern these days: the Fiscal Compact has not been implemented.

The problem is too little growth.

The MIP is a step in the right direction: it moves away from this obsession with fiscal surveillance, acknowledging the importance of financial market dynamics, housing markets and so on. Unfortunately, the MIP does nothing for symmetric adjustment – a current account deficit is excessive at 4 percent of GDP, while an excessive surplus is 6 percent. Moreover, it cannot make surplus countries stimulate their domestic economy to create markets for deficit or indebted countries.

Isn’t there a problem with fiscal rules not being enforced?

The Commission is wise not to enforce pro-cyclical fiscal consolidation, when monetary policy struggles to keep the Euro area on a trajectory of stable growth and the transmission mechanism from interest rates to the economy is weak. However, having to find loopholes does not help the credibility of European rules, nor the political acceptance and appreciation of the EU.

Stiglitz argues that ultimately the main weakness of the Euro is political – do you think this is true?

At the general level at which you formulate the question, I do. There is too little willingness to share more risks. However, in his book Stiglitz also blames the EU for its democratic deficit. You cannot have more democratic accountability and more risk sharing at the moment. The reason why we are not ready to share any more risks has to do with governments in the Netherlands, Belgium or Germany being first and foremost accountable to their electorate. Stiglitz’s 6 points are easily written, but how to implement them in a union of democratic states? He does not tell us the answer.