Is the sky the limit for drone technology in agriculture? 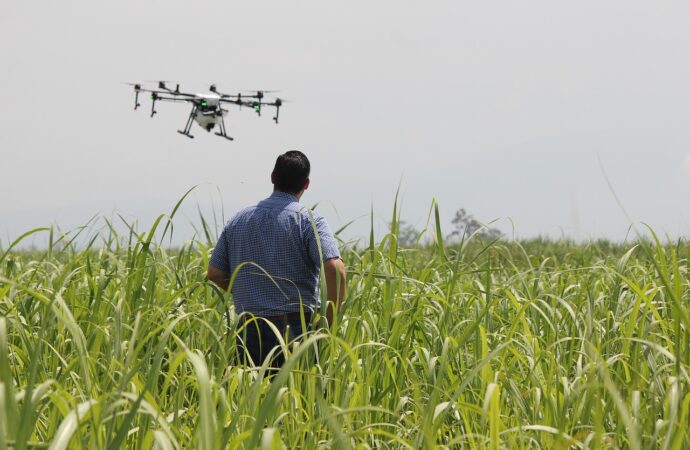 How drones are helping to revolutionise agriculture

There has certainly been a lot of buzz about drones recently. From Amazon CEO Jeff Bezos claiming drones will soon be dropping  parcels at our doorstep, to having the power to bring whole airports to a standstill, it’s safe to say the technology has really started to take off.

Drones are now increasingly being tipped as a technology that could help revolutionise a whole range of other industries, with agriculture in line to be one of the main sectors expected to benefit from the technology.

This may not be the first time people have ‘droned on’ about the potential that drones hold for agriculture but, thanks to a dramatic improvement in the technology’s capabilities combined with a significant fall in price, it is only recently that they have started to live up to the hype. Uptake of drone technology is therefore predicted to soar across the sector in the near future, with European consumer drone shipments expected to increase four-fold by 2021. So how will this change the face of agriculture?

Agriculture, driven by an urgent need to keep pace with the demands of an ever growing population, is under increasing pressure to produce more with less. Even in ideal circumstances, this would be no mean feat, but when you combine a need to potentially double food production by 2050 whilst working in a shifting and uncertain climate, it’s clear that our agricultural industry has no choice but to innovate – and fast.

One response to this has been the practise of ‘precision farming’ (or ‘smart farming’). This is a data-based system of farming which allows farmers to get to know their farms’ needs more intimately, meaning they can manage their production down to the most minute detail. Using this information, the system can then be optimised to accommodate specific plant and soil needs in real time, improving crop quality and boosting yields whilst saving farmers precious time, energy and money.

But the benefits don’t just stop at farmers. The use of this type of technique also allows for fertilisers and pesticides to be applied much more precisely, thus sparing the environment from the excessive use of chemicals.

A document submitted last month by the European Commission to the EU member states makes it clear that in order to address the kind of environmental, economic and social challenges that we are increasingly facing, there is an urgent need to accelerate the uptake of technologies which facilitate precision farming methods, and thus a need to make them more accessible and efficient.

And this is where drones come in. Fast, agile, relatively inexpensive and packed full of potential, drones are proving to be an ideal technology for the agricultural industry, and one which is adaptable to a whole host of precision farming techniques.

From real-time soil, plant health and field analysis using infrared sensors, to monitoring irrigation systems for efficient use of water, to seeding hectares of land in just a matter of days – these are just a few of the benefits that have been highlighted in a recent European Commission report on the application of drone technology in agriculture.

Unlike notoriously unreliable and costly satellite imagery, formerly the most advanced form of crop monitoring technology, drones are able to monitor crops more precisely, regularly and affordably, thus ultimately delivering higher quality data which offers a level of insight into crop development and practices that would have been previously unthinkable.

This is far from mere conjecture. Experiments with drones are already well underway and have started to show some extremely promising results. One study with the OCEALIA group, a French agricultural co-operative, found that using drones increased farmers’ yields by an impressive 10% on average.

Furthermore, the collection of such accurate data also holds the potential to be a powerful research tool. By collating the data gained from drone use from multiple farms, this dataset can then be used monitoring of large-scale change across a region, allowing researchers to explore trends and a wider set of farming practices, thus helping to optimise agricultural systems all over the world.

Drones in a European context

Thanks to the fact that farmers in Europe have shown to be very open to use of drones, Europe is rapidly emerging as one of the dominant forces in the market for agricultural drones. However, if drones are going to live up to their potential in Europe, there are still a number of challenges which must be addressed in order for the technology to really be able to take off.

Firstly, it is clear that there are some obvious technical challenges that still must be overcome for the technology’s wide spread adoption, such as the development and incorporation of low-cost, high quality sensors, and the appropriate software platforms to support them. That being said, there are a multitude of companies springing up that are ready to rise to this technical challenge, and drone technology continues to improve by the day.

Other inhibitory factors include cost. Agriculture remains, on average, a low-paying industry, meaning that farmers often struggle to find the surplus cash required to invest in new technologies. Although the price of drones continues to drop, farmers will still need a helping hand to invest in the technology. It’s for this reason that government support for alternative ownership schemes, such as through the use of co-operative and shared ownership of drones, could help speed up the adoption of drone technology in rural communities.

There would also have to be a concerted effort to provide adequate training programs in digital data collection. This is especially pertinent in Europe, where over 56% of the workers in the agricultural industry are over 55—a demographic which tends to lack the vital digital skills that would be required to be able to access this type of advanced agritech.

There are clearly challenges to be met before the wide scale adoption of digital technologies, such as drones, in agriculture. However, these challenges pale in comparison to that of producing the amount of food required to sustain our growing population, and for that reason there is no doubt that the potential is sky high for drones to help optimise our agricultural systems.