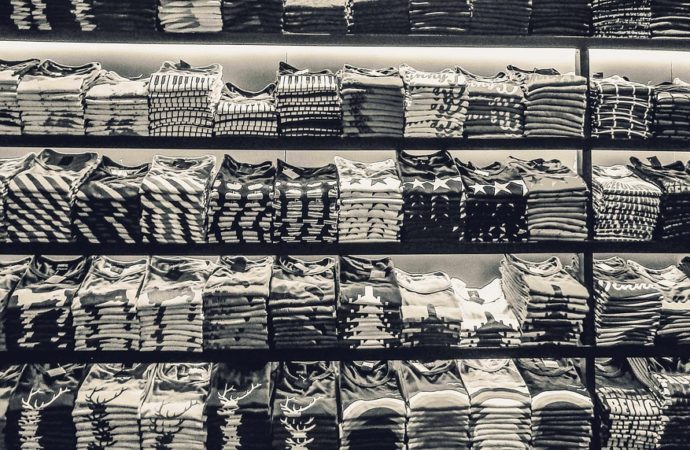 Clothing manufacturers are preying on the developing world for their cheap capital and labor to maintain speedy production. Fast fashion, the business model behind this, has increased demand for cotton used to produce most garments. Indian farmers provide a cheap version of the crop, a version genetically modified by seed monopolist Monsanto, which has created an inescapable dependency on the company; perpetuating bankruptcies, illnesses, and ultimately suicides.

Retail clothing consumerism has developed an insatiable appetite for disposable clothing due to the influence of the fast fashion business model. Stores such as Zara and H&M have utilized this business model to capitalize on the buyers’ desire to have the newest trends as soon as possible and as inexpensively as possible. Stores have started producing new clothes at never before seen rates using developing nations for their cheap labor and capital. Though this has greatly increased profits for producers, those involved in the supply chain face a different reality. Fast fashion creates an enormous demand for cotton in order to continuously fuel quick production of garments. Cotton farmers in India, experiencing a new level of demand for their crop, were entrapped by seed producer Monsanto, a world leader in genetic modification science. Monsanto has a monopoly on seeds in India and has promised a faster growing cotton plant that is able to keep up with the demand from the garment industry. These new seeds, however, and the pesticides needed to grow them, are very expensive and put farmers into crippling debt.

In order to buy the genetically modified crops, or GMCs, Indian farmers needed to take out loans. Monsanto has a trademark on the seed because it added a traceable gene so it can identify which seed is theirs. This gene intends to make the cotton plant grow faster and control weeds, but it also makes the crop require pesticides to prevent destructive insects. These pesticides are also sold by Monsanto, thus creating a unavoidable dependence on the seed producer by the farmer. This was unforeseen by agrarian India who had no choice but to buy into the Monsanto seed monopoly.

Tragically, neighboring farmers who didn’t buy the GMCs are now beholding to Monsanto, as well. Their cotton plants are widespread in India’s Maharashtra region because seeds are easily transferred via wind, runoff water, and proximity to other farms. When Monsanto discovers that a farmer who didn’t buy their seeds is growing their GMC, the international corporation will demand a royalty. These royalties are bankrupting the farmers at alarming rates. Most Indian farmers are struggling with massive debt today, so when a royalty is demanded, they are faced with a financial burden that is inescapable. This situation can be so depressing that many farmers turn to suicide.

This is not uncommon. It is estimated that every 30 minutes an Indian farmer commits suicide due to indebtedness to Monsanto. A total of 8,000 farmers committed suicide in 2014 with 3,000 being from Maharashtra, India’s cotton belt. Indian publications, however, have conflicting data. The Times of India cites the National Crime Record Bureau (NCRB) saying bankruptcy only accounts for 1.8% of suicides in 2014. While a different piece, directly published by the NCRB, says that indebtedness is responsible for 20.6% of suicides in the same year. The discrepancy between the data comes from the complications of surveying rural regions and investigating the causes for suicide. What leads us to believe that bankruptcy is the deadliest suicide incentive are activist’s observations in the region and anecdotes from the farmer’s families. Widely respected Indian activist and scholar, Vandana Shiva, articulates that GMCs “have resulted in many farmers being mired in debt and turning to suicide.”

Other leading causes of suicide among Indian farmers include family problems, farming related issues, illnesses, and substance abuse. Arguably, bankruptcy can be a major contributing factor to all of these problems. Pesticides are causing health complications in rural communities. Monsanto also sells the pesticides essential to protecting their GMCs from insects. Indian farmers inhale these pesticides, get them on their skin, and put them into their environment which affects their drinking water, soil, and air quality. Several cases of birth defects have arose in children born in agrarian communities that use these chemicals. As for the farmers spraying the pesticides, cases of cancer, schizophrenia, and depression have appeared; all contributing factors to the suicide pandemic.

Going back to the root of the problem—fast fashion—we can see how the business model has lead to farmer suicides in India. Consumers should seek an alternative to buying fast fashion garments, which come from the exploitation of these farmers. One alternative is to shop sustainable brands. Patagonia, Everlane, and People Tree are examples of producer centric fashion companies that support a sustainable supply chain for their garments. They use organic cotton, untreated by pesticides and non-GMO, they employ artisan labor, and promote fair trade practices. If more companies follow the same doctrine as sustainable brands by making fashion ethically and considering those affected by the supply chain, then the first-world might be able to lessen its negative impact on developing nations. If this is accomplished, the garment industry could head in a more sustainable direction, alleviating the problems of the Indian farmers, and ultimately bettering their lives.