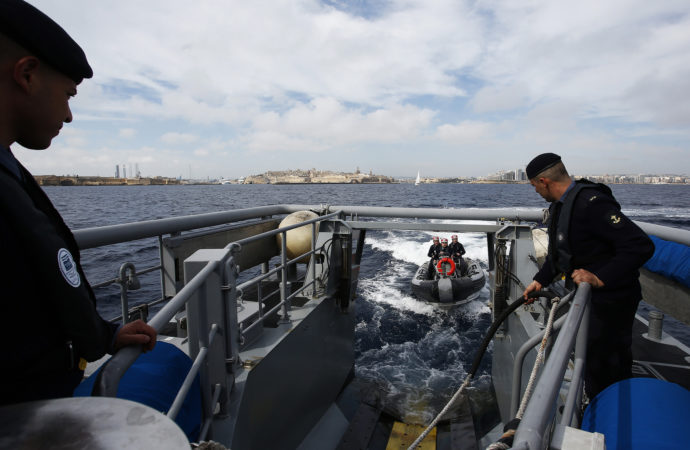 According to the speeches on the inauguration day of the newly re-shaped Frontex agency, it seems that the European Union has found the best antidote to the migration challenge so far: the novelty has been labelled a “milestone” in the history of border politics and solidarity between Member States. But Frontex’ new aims focus foremost on control and monitoring, whilst little is said about the asylum system and the refugees’ rights.

On October 6th, with a record approval time, the EU officially launched a new agency for the management of the external borders of its members. This was demanded to tackle not only the migration crisis, but to furthermore respond to a long-lasting political crisis concerning especially internal security. EU and Frontex officials, together with Member States’ representatives, gathered on the Bulgarian-Turkish border and formally started a new apparatus: the European Border and Coast Guard Agency (EBCG). Millions of refugees, with their hopes and dreams on their shoulders, were crossing this border on their way towards Europe – a border that is now fenced.

To understand this perceived excitement, we have to look at the new policy from the perspective of European political leaders. As the migration situation has been portrayed as a crisis, public perception of the phenomenon resulted in far right revivals and in a shift from a “welcoming culture” to the re-establishment of “Fortress Europe”. Now that the European Parliament and Council have agreed on the Commission’s proposal, national leaders can brand a supposedly more responsible approach to the management of borders and fight against illegal migration in a bid to win the approval of their voters.

Whilst forcing more cooperation on Member States, the agency also has the power to deploy 1500 officers in situations of emergency at the borders, offer trainings, share intelligence and assess the respective national abilities to manage the frontiers with ad hoc “stress-tests”. All of these controlling mechanisms and monitoring measures should aim, in the words of Vice President Timmermans, at the prevention of “uncontrollable situations” and at acting collectively in times of crisis.

The new agency arrives at a “favorable” time: after the shut down of the Balkan route and after a deal between the EU and Turkey has been struck in March this year. Since then, the number of arrivals has decreased significantly. This however does not mean that there are fewer refugees or that they are in a safer place – far from it: their rights as asylum seekers actually seem to have been ignored in the last policy proposals.

The final charter of the EBCG only mentions ‘migrants’ once, when introducing the novelties linked to return operations, i.e. assisting Member States in returning migrants back to their countries of origin, in case they fail to qualify for staying in Europe. Once again the emphasis lies on the fight against illegal migration, without any indication for migrants who are eligible to stay. The refugees are not only at the mercy of ever-growing external barricades that guard the European soil, monitored by Frontex, but also of rigorous Turkish control, which could push them back.

A glimmer of light opens up only at the end of the EBCG fact-sheet, with the introduction of a complaint mechanism for allegations of human rights violations in respect of migrants. However, there are no clear indications regarding the procedure, except that the people in charge of deciding these claims will be staff members of the Agency itself. Amnesty International, among others, has already voiced concerns on this mechanism, which seems to lack impartiality and is possibly at risk of being overwhelmed with this task. On top of that, the risk for human rights violations might even come from the basis of its whole foundation – that same security-oriented paradigm which the agency has to follow.

Even though the focus has completely shifted on external borders and controls, migrants have not given up their journeys. In turn, whilst fences are raised, illegal – and dangerous -channels are exploited even more: 2016 is considered to be the deadliest year for migrants trying to reach Europe. The proposal for resettling refugees remains unheard, together with the possibility of promoting legal channels. The new Frontex agency has instead been approved in less than a year. If the EU cannot convince its members to accept measures in a field other than joint security and border control, the least it could do would be to push for a human rights based approach.