Relearning democracy: At the crossroads of Spanish elections 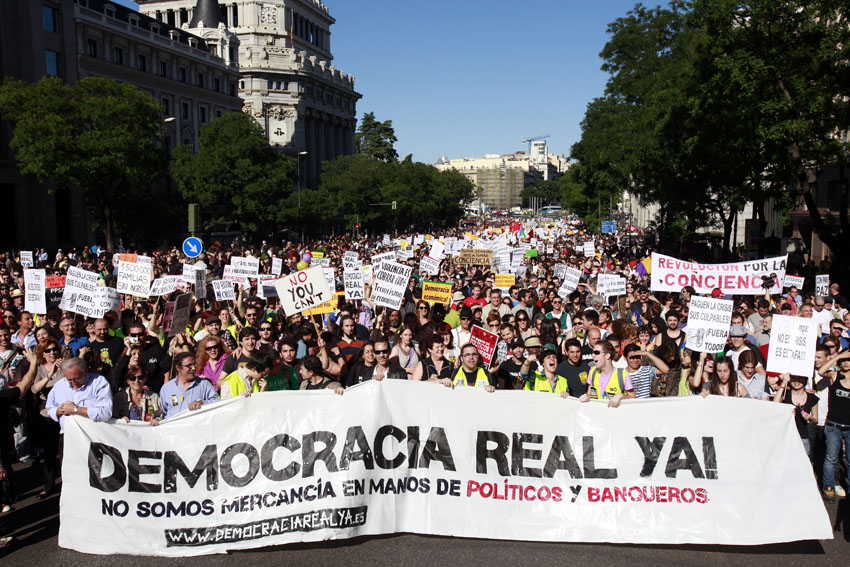 Facing the forthcoming parliamentary elections this Sunday, Spain continues to be immersed in a moment of uncertainty and ideological redefinition, with little time for reflection and even less for reaction.

Back to the beginning

Let us go back to that 2011 May afternoon when hundreds of thousands of people marched in all the main cities of Spain. It seemed that the simple but reasonable claim of the 15-M platform: REAL DEMOCRACY NOW, had found an open ear among the Spanish population. Why? The key to its success was a straightforward, transparent way of communicating through social networks, blogging, videoart, infographics or music spread through the internet – a new way of agit-prop which proved more powerful than expected.

The political, economic and social situation in Spain at that time was critical: after almost 15 years of above-average GDP growth, the Spanish economy began to slow down in late 2007 and entered into recession in the second quarter of 2008. Since then, severe austerity measures adopted by the government (at that time led by the socialist party PSOE) dramatically affected public services including health and education.

The unemployment rate climbed to over 20% for the first time in nearly 13 years (nowadays it is around 23%) affecting especially young people. In 2011, 1 out of 2 persons between 16 and 30 years in Spain was unemployed. They were what the media called “The lost generation”: sons and daughters of the welfare system who went to university hoping for a brilliant career only to find themselves sitting on a sofa waiting for a call that never came; or decided to pack their luggage and leave the country to find a job in London or Berlin. There were also those who, during the economic prosperity of the 2000’s, chose to work in the buoyant construction or service industries and suddenly had absolutely nothing in their pockets and a mortgage they were not able to afford. This social class, predicted to flourish in the era of Globalization at the End of History, became instead what Guy Standing brilliantly dubbed the Precariat. At the same time, the number of the so-called “New Poor” rose day by day: they were the middle class and lower-middle class families who, without any warning, ran into financial ruin, losing their investments, their jobs, or their houses, with thousands of small companies forced to close down.

In addition to the economic crisis, political corruption was the order of the day, as the world of politics grew ever more distant and remote for the majority of citizens. The ruling class that strutted among private companies and public structures created a complex and opaque web of interests fueled by political irresponsibility and contempt for the welfare state.

The results of the elections half a year later in November 2011, gave the victory to the right wing party, Partido Popular, as was expected, while the previous government party (the Socialist PSOE) showed the worst results in two decades. The new government followed the path of austerity that the former had inaugurated, with a neoliberal project devoted to accept all conditions imposed by the European Union in order to avoid a total collapse of the country’s economy.

Some voices claimed that after all, the 15-M demands did not inspire voters, nor shake the two-party system in Spain.  Nevertheless, those within the movement affirmed that 15-M still has much to say in the years to come – as the next elections proved.

Spain at the crossroads: Who is who?

The 2014 European Parliament elections on 25 May 2014, interpreted as a national plebiscite on crisis management, brought up a new political party, Podemos, popularity of which had to be taken into consideration. Led by a group of intellectuals and activists on the left, their discourse fit with the proclamations of the 15-M but offered young, new faces with new dialectics of resistance. Their rapid ascent was not without its controversies – the support of certain contentious figures, the fragmentation of the traditional left, the legacy of the Communist Party, as well as the political inexperience of its leadership.

Pressure from the right also threatened to challenge the existing 2-party system. Ciudadanos was born a liberal party, with a seemingly centrist agenda, which had the support of large companies and young conservative voters. Despite the fact that it sought to capture the support of the right-wing voters dissatisfied with the current President Mariano Rajoy and the corruption of his party, its results were modest.

The main debate topics were the management of public debt and consequences of the country’s banking system bailout by the IMF, while public services and servants faced severe cuts. Corruption scandals and classic domestic issues such as Catalonia’s independence were the other hot topics. But in the end, the key factor that was reflected in the results was the wide social discontent.

The 2015 election resulted in the most fragmented Parliament in recent times, leading to our situation now when elections have to be held as a result of a parliamentary deadlock: the first time since Spain became a democracy. Much to be learned, much to be relearnt: democracy is not a game of two, or even four or five parties in dispute. It involves society as a whole.

The tale of two Spains or something new?

Today, in the middle of an austere campaign where each party seeks to exacerbate the contradictions of the others, polls reveal that PP would win the elections followed by Podemos, PSOE and Ciudadanos. However, the possibility of a left-wing government is feasible, it all depends on the decision of the PSOE: to support left, or to support right. Some authors see these elections as a re-appearance of the old tale of “two Spains”. An expression with deep historical roots that refers to the permanent tension between those who have leftist and liberal views and those who support more traditional, conservative ones; looking at each other with suspicion and rancor, after a harsh Civil War and 40 years of national-Catholicism in the shape of Franco’s dictatorial regime.

However, the result of this election will mean more than a potential transition of power from one side to another – it will mean a generational one that should break the cleavages of the traditional Spanish 2-party system. A lot has changed since the transition to democracy in 1975 that was agreed by the power elites which needs to be deeply rethought.

Anyway, the most important lesson we, Spaniards, are learning -against the clock- is the regain of politics as a social space. Informal chats about politics are held in cafes, on social networks, during family meetings or in the parks. Skeptics say that – whatever happens – Brussels and the IBEX 35 dictate the rules of the game and the actual margin of manoeuvre is ridiculously narrow.

But let us be optimistic, because again – whatever happens – politics in Spain is starting to return back to the people. Less elitist, more participative. It is an important lesson not to be forgotten.