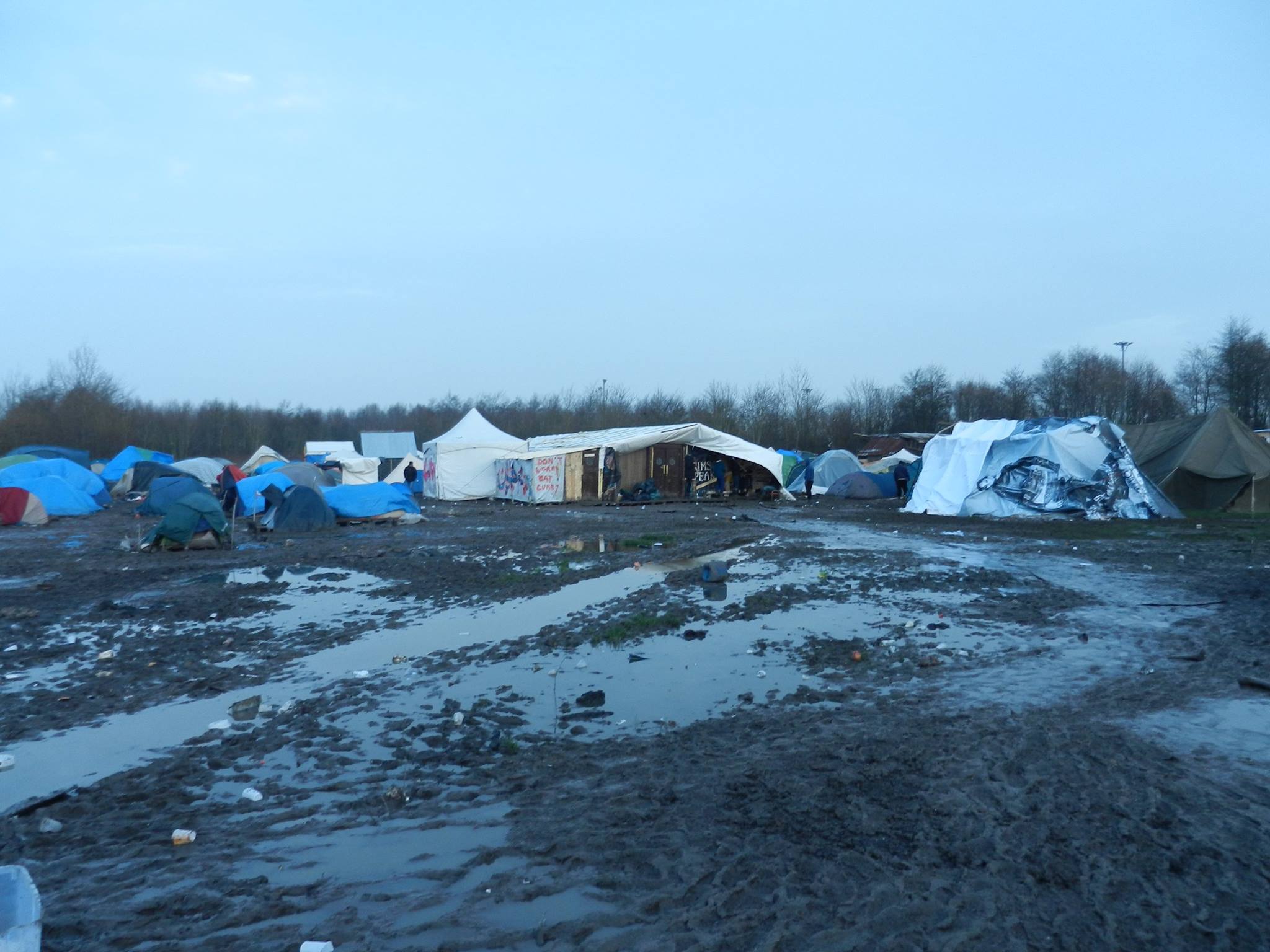 Refugees in Dunkirk are denied even the most basic of human necessities, whilst aid agencies face a seemingly futile battle to keep their heads above the water.

Amongst the marshy, coastal French Flanders lies a town once famed for it’s historic part played in the Second World War. The city of Dunkirk is one of France’s major port towns, with direct connections to the United Kingdom by ferry, and it lies mere kilometres from the border with Belgium. Whilst the city’s era of Nazi occupation confines itself further into late modern history, a new humanitarian crisis looms, and with a great human cost. The borough of Grande-Synthe now hosts a staggering number of Refugees, part of a growing narrative of conflict and civil unrest in the Middle East. Estimates from independent camp surveys, Medicines Sans Frontiers (MSF) and the French Government point the total figure at anywhere between 1700 and 3000 refugees – mostly male – but with a startling presence of women and children. Over the 2015 Christmas period, the camp appeared to be growing by as many as 70 to 100 new arrivals each day, all with the ambition of better living conditions and greater prospects of seeking Asylum in the West, specifically the United Kingdom. Whilst the general focus of the Western media has highlighted the plight of Syrian refugees, most camp dwellers in Grande-Synthe identify as Kurdish, or Iraqi Kurdish alongside a small population of Persians and Vietnamese.

On arrival into the camp – either through the discreet forest entrances or the main entrance checkpoint, fronted by the armed French Gendarmerie – the smell of burning plastic, unavoidable quagmires and the constant brushing of shoulders with men, women and children, often clad in worn out shoes and asking for the most basic of items, grants a glaring insight into the scale and nature of this crisis. Rows of battered, uninsulated tents, often of smaller births than family sized, line the slushy, makeshift pavements, whilst sporadic clusters fill the neighbouring marshlands. Covered in battered tarpaulin and with the occasional pieces of cardboard or scrap wood pieced together for some foundation against the unforgiving land, the tents seem only a temporary solution to the blistering cold and battering coastal winds, yet they must provide an indefinite source of shelter. With only eight clean water taps for the entire camp, and as few as 20 toilets, sanitation is a crucial concern, with conditions such as scabies and severe chest infections on the increase. Whilst international law is patchy with regards to the standards for a refugee settlement, the camp falls far below the 2011 Sphere Project handbook standards for humanitarian response. Frequently, international journalists visiting the camp describe it as the worst they have reported. But what of the civil response? At the time of writing, the site is maintained by merely a handful of permanent aid workers (those staying permanently on a day to day basis, or on a rotating schedule). Volunteers over the 2015 Christmas period stretched as far as an estimated 40-50 volunteers for the entire camp, however there is a regular presence of MSF, Salam and Medicines du Monde on site. A men’s distribution centre, camp kitchen and women & children’s distribution tent are all staffed by permanent volunteers, yet their storage and staffing are not sufficient for the constant growth of the camp, especially during the unforgiving winter period. Whilst speaking to new arrivals on the camp, the mention of discrimination between different nationalities in these centres was all too frequent, regardless of the fact that the centres are always staffed by refugee volunteers. Smaller organizations, such as the Bristol based Aid Box Convoy, endeavour to personally distribute aid to those who cannot access these centres, but are hindered once again by a shear lack of man-power. Most organizations appear to work on a “help them to help themselves”, grass routes development model, often incorporating refugees into their workforce and integrating with the communities, treating everybody as equals and building strong relationships in the camp.

Scribbled onto this rain soaked piece of paper were Kurdish written names of celebrities, rock stars and inflammatory statements, as a form of protest by those refugees wishing to remain anonymous.

Nevertheless, hindrances to the relief efforts are undoubtedly numerous, and mainly come top down from the French authorities, but also breed within the camp’s chaotic framework of aid distribution. An infamous source of conflict are the Gendarmes. One can directly experience an inhumane and seemingly sadistic engagement, simply by arriving at the camp with a collection of useful aid, such as tents, blankets and wood. Unless direct permission from the mayor is granted (and even said permission is no guarantee), these items are prohibited from being brought on site. All too frequently, shipments of donated blankets and tents brought from far-flung places such as The Netherlands, Switzerland and Scotland are bluntly refused on site and the distributors are asked to clear the area. Further accounts from volunteers have claimed certain Gendarmes occasionally laugh at refugees and aid workers, whilst they are breaking down scrapped, wooden pallets into fragments deemed suitable for firewood, and not for construction. Regulations appear to change on an hourly basis, with a change of guard resulting in a complete shift as to who and what is allowed on camp. One of the greatest mockeries experienced by refugees and volunteers was the introduction of a compulsory “sign-in” sheet at the gate. Scribbled onto this rain soaked piece of paper were Kurdish written names of celebrities, rock stars and inflammatory statements, as a form of protest by those refugees wishing to remain anonymous. It is not uncommon for non-white volunteers to be asked to sign the register, despite having no known obligation to do so. The tear gassing on New Year’s Eve of family areas in the nearby Calais “Jungle” suggest that relations with the local police could deteriorate further. Whilst the government, condition of the camp and climate all compete to impede aid workers as much as possible, one unforeseen hindrance to relief is aid distribution itself. Since the camp has no top down structure with regards to aid agencies, it is the task of each individual aid worker or organization to understand the larger picture, and work side-by-side with conflicting projects. This, however is by no means limited to those working regularly on the camp. External relief efforts from both large organizations and small, independents can cause more trouble than their worth. Day trippers with vehicles travelling from far and wide often arrive insufficiently prepared and unannounced on site, with aid that is either disorganized, or items completely useless to the current condition. Inevitably and often combined with unfortunately untrained members of the public, once kind-hearted donation efforts turn into nightmarish distribution situations, putting stress on local workers, refugees and sanitation, with packaging, food and clothing often littered around the area of distribution. These situations are frequently picked up by journalists and government officials, painting a skewed, xenophobic reality of the crisis. Scenes of scrambling refugees, seemingly ravaging trucks full of aid are merely the result of individuals falling short of prior planning, careless distribution and lacking in patience. These conditions span into much larger organizations, such as the Red Cross. One relief effort on their behalf consisted of an articulated truck arriving on site, immediately blocking any other distribution efforts. Tens of volunteers then conducted a line style distribution of backpacks, filled with items quoted directly from refugees as “useless”, such as hats, gloves and toiletries, which at the time were already in abundance on site. The shear financial cost of such reckless distribution is unfathomable. Aid requirements at the camp change on a daily basis. Relief convoys should check with workers and organizations on the ground before travel (At the time of writing, contact Care4Calais or Aid Box Convoy for details).

Police forces are refusing to allow even the most essential items onto the camp, and at the time of writing, the climate is growing increasingly inhospitable, and combined with the natural flooding of nearby rivers, hypothermia is an impending crisis.

The contemporary situation in Dunkirk is crying out for a shake up of government policy with regards to the immediate and long term survival of those dwelling in the camp. With the local government currently planning to reduce the population of the nearby Calais Jungle to a mere 2000 (with the population currently estimated to be above 6000), pressure is going to be drastically increased on the exponentially expanding Dunkirk camp. Police forces are refusing to allow even the most essential items onto the camp, and at the time of writing, the climate is growing increasingly inhospitable, and combined with the natural flooding of nearby rivers, hypothermia is an impending crisis. A structure imposed from the ground up must be imposed on the government, as well as aid organizations and individuals wishing to contribute to relief efforts. Without a thorough understanding of how the camp continues to function and communication falls short of understanding the correct aid for the ever fluctuating day-to-day life in the camp, efforts will continue to struggle, and the situation could become victim to civil apathy under the seemingly futileness of humanitarian efforts. As one aid worker quipped whilst slogging around the camp; “if you stand around in one place for too long, you get totally stuck in the mud”. Those working on the ground must have the correct tools at their disposal to reach out of the progressively fortifying walls of the camps to local and National governments, and expose European policy for the fatal disregard it currently poses, and mobilize those officials into securing the lives of the men, women and children currently struggling in those liminal, timeless spaces on our very own doorsteps.