The European Pillar of Social Rights: towards a fairer Europe? 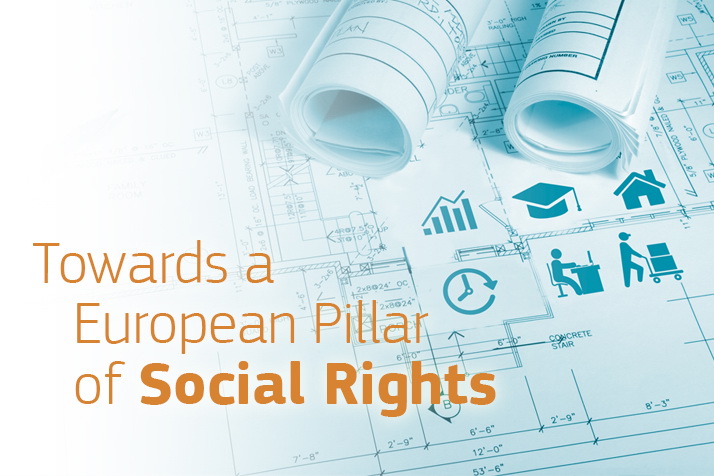 On 8 March 2016, the European Commission presented a first preliminary outline of the European Pillar of Social Rights, as part of the on-going work for a deeper and fairer Economic and Monetary Union. But does this first draft actually present the potential to meet the existing expectations on the social field for a fairer Europe?

The development of the European Pillar of Social Rights comes as a reaction to the far-reaching social consequences of the profound economic crisis of recent years. Cutbacks in the field of social protection, imposed on member states under the existing rules of fiscal discipline, have intensified the corrosion of the ‘European social model’, while high unemployment figures, increasing poverty and social inequality has led to the severe deterioration of social cohesion both between and within the Member States.

Under these conditions and as a response to the widespread criticism of the aggressive austerity measures imposed since 2010, the European Commission recognizes that the social dimension of the European Union, which was neglected in dealing with the Eurozone crisis, needs to be strengthened. As pointed out at the Five Presidents’ Report on Completing Europe’s Economic and Monetary Union – “Europe’s ambition should be to earn a ‘social triple A”. The engagement of the Commission in a broad consultation throughout 2016 stands as the first step within this endeavor.

With regard to its content, the preliminary outline of the Pillar is structured around three main headings: (1) equal opportunities and access to the labour market, (2) fair working conditions, (3) adequate and sustainable social protection. Under these main headings, a number of principles are set out, aiming to complement and operationalise the social objectives and rights already inscribed in the EU primary law. As stated by the Commission, the purpose of the Pillar is to express a number of essential principles to support well-functioning and fair labour markets and welfare systems.

Although the Pillar is not meant to introduce new social rights, it has definitely significant symbolic merit, on the grounds that it represents an attempt to operationalise the existing EU social “acquis”, laying the basis for an open social dialogue and highlighting the importance of fundamental European social values. However, it contains some important shortcomings and questionable elements, which cannot but concern us.

The first noticeable shortcoming of the presented draft concerns its unclear legal nature. Although not decided yet, the Pillar is most probably not intended to be integrated in EU primary law. As a result, the final document will not develop any legally binding force, but it will simply serve as a reference framework to monitor the employment and social performance of participating Member States. This will inevitably undermine effective implementation of the planned policies.

Secondly, many of the suggested principles simply restate already existing legal provisions, without any actual added value on the operationalization of social rights. Moreover, the vague reference to collective social rights in a document claiming to introduce a “pillar of social rights” for European people is a tremendous shortcoming, especially when the collective bargaining systems and the protection from large-scale redundancies have been seriously eroded during the euro crisis.

Ιn addition to the above, the preliminary outline of the Pillar seems to be dominated  by a strong economic perspective and a market–centered logic. The superordinate position of economic considerations, such as the need to boost competitiveness and to increase the resilience of economic structures, in a document that aims to effectively enforce social rights, is highly controversial. Based on that, it is more than obvious that the Pillar will not – or does not even try to – appease the institutional asymmetry between economic policy and social policy, thus inevitably leading to the submission of any proposed national employment and social policy to the economic constraints set by the acquis of the Single Market and EMU.

Despite its declared objective to achieve a fairer Εurope, the preliminary outline of the European Pillar of Social Rights displays undeniable shortcomings, which reflect the subordination of social justice to the requirements of fiscal discipline and economic competitiveness. This cannot but undermine the quality of intended social protection. These deficiencies will have to be addressed vigorously during the ongoing social dialogue – if the Pillar truly aspires to introduce social reforms and institutional innovations with positive effects on the welfare of the peoples of Europe.