The future of press freedom depends on basic income 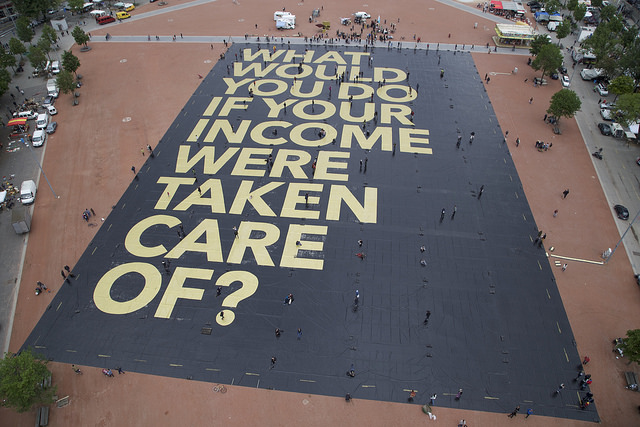 There is a viable policy to protect freedom of press in the age of social media platforms: universal basic income. It shifts the focus from click rates towards deepening public debate. Our democracy may well depend on it.

There is a viable policy to protect freedom of press in the age of social media platforms: universal basic income. It shifts the focus from click rates towards deepening public debate. Our democracy may well depend on it.

Because digitalisation is profoundly changing the relationship between reader and text, traditional publishers are faced with the challenge of rethinking their organisation and self-image.

The Austrian quality paper I‘m writing for, Der Standard, is no exception. One way the publishing house is adapting and responding to change is by using readers as authors on basis of their expertise.

In 2017 the online edition of Der Standard opened for readers’ articles. Unlike in classic social networks like Facebook, all contributions of these so-called user-bloggers are checked and proofread by experienced in-house editors. They thus meet the general requirement or standard of journalistic articles yet follow a logic similar to social networks.

It’s a good deal for both Der Standard and its user-bloggers. While the paper receives quality articles free of charge, the user-bloggers use the public reputation of the publishing house to bring their views into debates and to initiate discussions. Their independence allows them to ignore any editorial policy and the pressure click rates exert on journalists. For them, payment plays a subordinate role. Because they already have an income.

Sounds familiar? Politheor was born into this new world of media platforms. Politheor is run solely by independent authors delivering quality pieces. They use the platform to get editorial guidance on op-ed writing – and to brush up their CVs. What some might see as a cacophony of opinions can also be viewed – structurally – as a democratisation of media.

Importantly, if authors and editors didn’t already have an income but were flipping burgers all day to make a living, their precious talent and knowledge would be wasted.

It‘s quite simple: income is a requirement for work, for example, to do research, to write and keep alive those debates about systemic injustice and inequality going that a neoliberal press brushes aside to maintain power.

The income-first logic could be true for most professions. Income frees people to do the kind of work they would like to do or deem necessary for society. Flipping burgers just isn’t. Surprisingly, the contrary still rules much of our thinking. As a result of a 19th-century capitalist work ethos, which has us work primarily to get income, we still compete for our basic needs. Competition for existence eventually leads to social segregation and a waste of human potential and innovation.

Critical journalists suffer from this industrial mindset. “Freischreiber”, which translates into “free writer”, serves as an example. This German organisation fights for better remuneration of freelance journalists, for example by introducing a Code of Fairness or by naming and shaming publishing houses.

Their well-intended sanctioning reveals a certain state of despair in the community. Worse, it’s missing the point. It fails to understand the structural problems the industry is dealing with. The publishing houses are under pressure themselves. The sales volume of printed newspapers is continually falling and with it their revenue from advertisements. The annual turnover which all German newspapers were able to generate through the sale of advertisements amounted to €6.55 billion in 2005. By 2016, the total had been reduced to €2.53 billion. Financial foundations are eroding and the scope of independent media is becoming noticeably smaller.

Journalism that shows the courage to initiate public discussions builds on independence. Independence requires economic security. This could be maintained with a Universal Basic Income: a standard and periodic cash payment received by every member of a society, unconditionally, regardless of their circumstances, and high enough to live a life in dignity.

Having followed the Basic Income movement for many years, I’m convinced that press freedom as a vital pillar of our democracy rests on individual economic security. Because we are dealing with a problem which has afflicted the industry and beyond. Without Basic Income as a policy guaranteeing individual freedom, it is not only the plurality characterising social network media, which projects like Politheor represent, that is being dramatically reduced.

If click rates and sales continue to determine journalistic rigour, public debate will become ever more polarised and toxic. The rise of authoritarian tendencies and the dismantling of press freedom go hand in hand. It’s up to us to safeguard that journalistic autonomy. Let’s start by unconditionally guaranteeing each other the foundations of our existence. Why not?