The power of people: A victory for Polish women and human rights 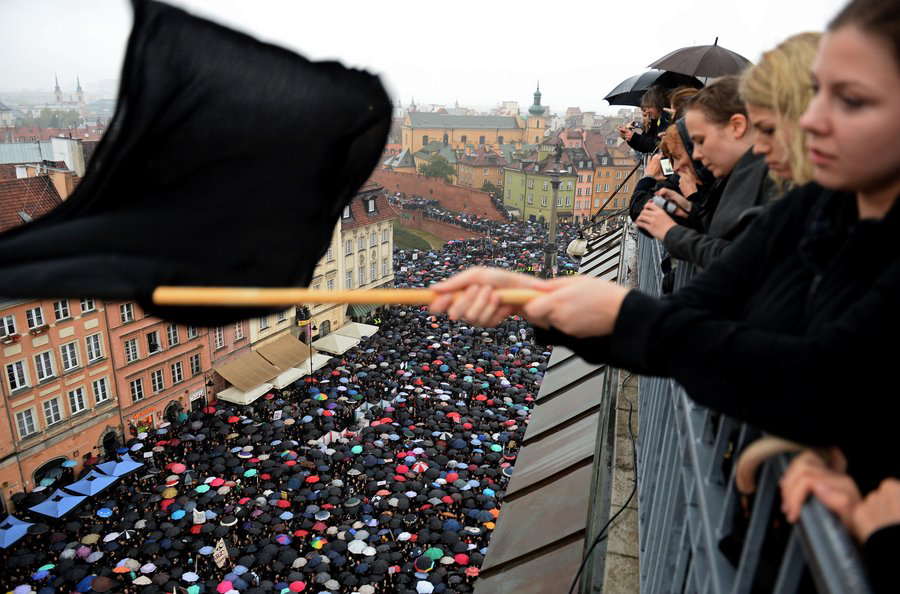 Coming from a Catholic country where 7 out of 10 doctors are conscientious objectors, I followed the debate on abortion in Poland with passion, and hope. Hope for the protest of 30.000 people who went out onto the streets in early October, and managed to save Polish women from what felt like a medieval backlash.

October 3rd, Black Monday. Thousands of Polish citizens gathered all over the country, boycotting their jobs and schools to send a strong sign to a government who seemed to have forgotten the simplest notions of human rights.

Following a citizens’ initiative from the advocacy group “Ordo Iuris” and the coalition “Anti-abortion”, the Polish government initially backed a law proposal entailing a near-total ban on abortion. As a quick reminder: a total ban on abortion is only contemplated in the jurisdiction of States such as the Vatican. In this article I argue that a near-total ban is nonetheless, just as dangerous and threatening to the principles of democracy.

Historically, abortion was widely liberalised under the Soviet regime and remained legal after the fall of Communism. Why Poland was the only one of these post-Soviet countries to reverse the liberalisation of abortion laws has largely to do with the deeply rooted presence of the church – reaching its apex with the papacy of Wojtyla, John Paul II – who is known for being conservative, especially on sexuality and women’s issues.

The attempt to introduce the ban arrived at an already difficult time for Polish society. Since the political party Law and Order (Pis) obtained an absolute majority in the parliament, the country had started to veer towards the far right of the political spectrum. This led, for example, to a total refusal on the relocation of refugees.

Due to the interference of the church and this very conservative government, the current abortion situation in Poland is one of the most restrictive in the world. The termination of a pregnancy is illegal except in three (extreme) cases: rape or incest, if the woman’s life is at risk, or if the foetus is severely ill. If one of these conditions applies, a legal “check” has to follow, i.e. a physician must give consent for the latter two cases, and a prosecutor for the first one. I can only imagine how long and agonising this process could be. Added to this is the not unlikely possibility of encountering a doctor who refuses to perform abortions. It is then no wonder that women choose illegal and often dangerous alternatives abroad, according to what they can afford.

The new ban would have eliminated two of those conditions – rape/incest and foetus’ illness – allowing abortion only in extreme cases endangering the pregnant woman’s life. Doctors would then only be entitled to intervene when the health risk becomes potentially fatal; there would be no exemptions foreseen to allow a doctor to take preventative action to save her). If these rules are not respected, both the woman and the doctor could then be prosecuted and face a prison sentence of up to 5 years.

Leaving aside pro and counter arguments for abortion, I argue that such a proposal goes against two fundamental rights, overtly recognised since the Universal Declaration of Human Rights: the right to privacy and the right to equality. A woman, as any individual, should be entitled to decide for her own body, life and will. Only then it is possible to talk about equality and the absence of discrimination on the grounds of choices an individual makes about their own self.

As anticipated, the government and the Church were initially in favour of this rather absurd proposal. It is only thanks to the courage and participation of the people in Black Monday that they were forced to retreat.

October 5th. Due to the chaotic situation, generated especially by Polish women, an MPs committee recommended that the Parliament vote down the proposal.

October 6th, democracy wins a significant battle. The lower house of parliament rejects the new legislation, with only one fraction in favour. The leader of the Pis, Kaczyński, back-pedalled the government’s position with the excuse that such a ban “could lead to opposite reactions in the future”. His party members followed these controversial instructions, whilst others saw it as a betrayal of conservative values. The future is still unsure and the law nonetheless restrictive. However, the abortion ban would have been a betrayal of the rights of women and their will – and these values won today.