Basel 4 and European banks, are we safer now? 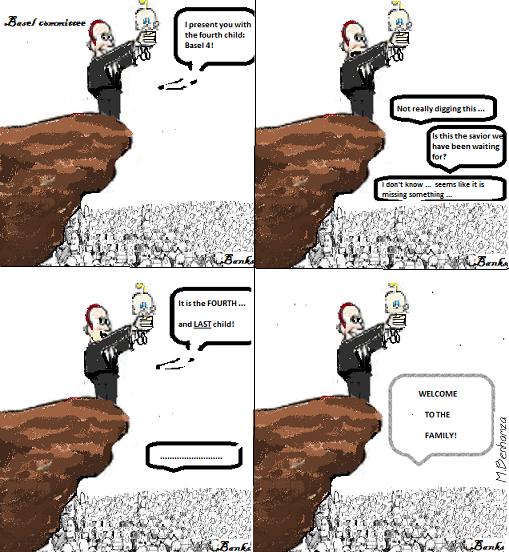 The Basel Committee on Banking Supervision (BCBS) has recently agreed on a new set of rules with more restrictive requirements for the banking sector. These provisions will force European banks to converge to standardised risk-weighting of their assets by 2027 and should create better harmonisation of international capital requirements.

«Basel endgame», sentenced Mario Draghi on December 7th, at the presentation of the new BCBS package of rules for the banking sector. After an 8-year delay, chiefly due to the divergent interests of American and European standard-setters, a revision of Basel 3 was eventually agreed on. Basel regulators found a compromise for the adoption of the new rules by conceding longer implementation periods during which banks can adapt to the international regulatory framework.

In the wake of the Global Financial Crisis, the solidity of financial institutions became of utmost importance, and assessing it a crucial matter. Within the banking sector, solidity primarily means holding capital to absorb unexpected losses. The structural robustness of banks against unforeseen fall of assets’ value or confidence loss by investors and depositors ― with the consequent risk of a bank run ― is summarised in quantitative terms by the capital adequacy ratio (CAR):

In other words, the ratio represents how much capital backstop holds a bank, in relation to the probability (risk weight) of its investments (assets) to go awry. As the theory goes: the higher the capital in the numerator, the less dangerous the risks proxied by the denominator.

So, what are these new rules?

Dubbed “Basel 4” by the financial industry, the new regulatory package is rather the completion of the unfinished business of Basel 3. If the CAR numerator (aka capital) was the main target of Basel 3, the recent reform focuses on the denominator, aiming to reduce regulatory uncertainty. Basel 4 should create a level playing field in which all banks converge to a standardised approach on risk-weighted assets, enhancing international comparability of financial institutions and industry competition. So far, banks have in fact benefitted from a benevolent laissez faire by national supervisors and were allowed to use internal models to weight the risk of their assets, leading to great variation of risk estimations (as large as 30% for assets under market stress, according to EBA, the European Banking Authority). Variability in measuring RWA was thus addressed by the Basel Committee to avoid excessive discretion across the industry and tackle market uncertainty.

The main countermeasure adopted is the “output floor”, based on the fact that banks’ internal calculation of RWA cannot be lower than 72.5% of the risks estimated by regulators with a standardised model approach. Streamlining the treatment of operational risk is another significant part of the reform. An EBA survey of EU banks reported that operational risk is perceived as increasing for 55% of respondents, with cyber risk and data security driving bankers’ concerns (42%), followed by non-compliance with regulatory initiatives (24%) and IT failures (16%). Among this variety and complexity of operational risk sources, hardly predictable with internal models, Basel 4 introduces a standardised approach which considerably simplifies the comparison of RWA across banks.

Finally, Basel 4 attempts to discourage global systemically important banks (G-SIBs) from holding excessive leveraged capital (i.e. borrowed capital that is invested in other activities, begetting high systemic risks if the investment fails). The measure foresees a surcharge on capital requirements for G-SIBs, in order to make them less prone to risk-taking through leveraging and the whole financial system more robust.

For the sake of global financial stability, the harmonisation introduced by Basel 4 certainly represents a step forward. Nonetheless, there is a significant outstanding issue, i.e. sovereign debt exposure. Basel 4 did not modify the zero risk-weight of government assets accorded to all BCBS members. The problem is particularly serious in Europe where the sovereign debt crisis in 2009-11 highlighted the “doom loop” between domestic banks and sovereigns. Eurozone banks have a strong home bias and hold in their balance sheets disproportionate amounts of domestic government-debt securities, in spite of the absence of exchange rate risk determined by the common currency.

In addition to that, the high exposure to domestic sovereign risk is broadly deemed to be the principal transmission mechanism of sovereign debt shocks to the banking sector and vice versa. The zero risk-weight allowed under the current regulatory framework might even incentivise banks to hold such debt, consequently exacerbating sovereign risk. Across Europe, sovereign debt holdings are highly concentrated and the results of the 2016 EBA survey reported that 13 EU countries have more than 10% exposure to domestic sovereign bonds and loans. Nonetheless, the Basel Committee has not abandoned the reforming endeavour yet and has launched an open consultation for future actions on sovereign exposures.

Overall the future looks more stable in the banking business. The accomplishment of Basel 4 was exceptionally positive in a time of looming neo-mercantilist threats and nationalist resurgence. As the phasing in period progresses (2022-2027), the new regulatory framework will create a harmonised system that will strengthen the banking sector. The home bias issue remains unresolved for the moment, but sooner or later regulators will have to act and deal with it, if not at the Basel Committee, at least at the EU level. Finally, let’s not forget that a new, and maybe final Basel means the end to dedicating money and talent just to reach a consensus legislation wise. Now that the BCBS “regulatory quest” has ended, banks can focus these resources to implement the new agreed on regulations to the best of their abilities, and interest.