Can the EU’s fight against illegal logging help to preserve forest ecosystems in timber producing nations? 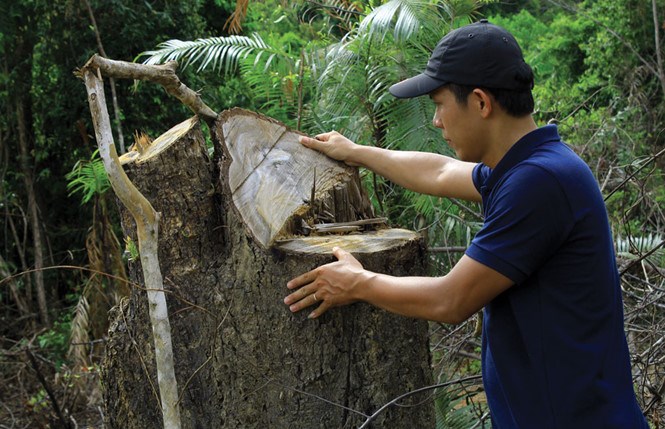 Preserving ecosystems via trade – A long way ahead for the EU’s fight against illegal logging.

In 2003 the EU passed the Forest Law Enforcement, Governance, and Trade (FLEGT) Action Plan, a path-leading framework to fight illegal logging and deforestation. However, fifteen years later there is still a lot of work to do until EU FLEGT unfolds a positive impact on climate change, forest ecosystems and local communities as intended.

In short it is aimed at improving forest governance and the preservation of nature and livelihoods via trade. To do so, multi-stakeholder engagement processes are foreseen for the Voluntary Partnership Agreements (VPA). VPAs are bilateral trade agreements between the EU and timber exporting countries which constitute a crucial element of the Action Plan. Negotiation and implementation have to include state actors, the private sector and the civil society. Six VPAs have been ratified already (with Cameroon, Ghana, Indonesia, Republic of Congo, Central African Republic, and Liberia). A seventh one with Vietnam was concluded in May 2017.

The influence of VPAs on ecosystems is indirect, but constituted in a commitment to sustainable logging practices and multi-stakeholder involvement. On the one hand, only timber certified as legal can be traded between the two parties based on the VPA. Therefore, the agreements clarify how legality is defined and assured. These definitions have to include provisions on sustainable logging and sustainable land use patterns. On the other hand, the FLEGT approach aims at including multiple stakeholders. This helps to foster local ownership and governance structures. By doing so, awareness can be raised regarding the necessity of sustainably managed forests and the preservation of biodiversity and ecosystems.

A long way ahead to focus on ecosystems

Many agreements are still in their early stages and therefore their potential for ecosystem conservation is not fully exhausted yet. Until now the VPAs focus on trade relations is prevailing. Technical matters are central, while the modes of ecosystem protection and stakeholder inclusion only play minor parts in the agreements. Additionally, most countries still rely on external certification systems that are not based on the EU criteria. This prevents the EU from pursuing ecosystem goals more rigidly. Furthermore, there has been a strong focus on including stakeholders into processes and procedures, but contents and context are often lacking. Focusing on stakeholders without specifically addressing the effects of logging on the ecosystems they live in and that are source of their income falls short of a comprehensive solution to the problems of forest degradation.

So what does it take to think FLEGT to the end and follow positive effects of VPAs through to the ecosystem level? As the more important trading partner in all the agreements, the EU has an important lever in changing practices on the ground. They need to acknowledge and actively promote the importance of ecosystem preservation in negotiation and implementation processes. They are already funding numerous civil society projects where ecosystem consideration takes a more prominent spot. Projects such as the Vietnamese NGO-Network raise awareness for ecosystem topics and promote local stakeholder groups as advocates and multipliers for ecosystem preservation. This goes in line with a special report by the European Court of Auditors stating that the EU should support public, private and civil society stakeholders in VPA partner countries further.

Overall, the EU needs to take a more active stance for VPAs to be more than trade agreements. The focus on stakeholders, livelihoods and ecosystems has to be more than a lip service, but actual commitments need to follow.  In many partner countries governments are becoming more interested in holistic approaches. At the same time, civil societies and private actors are willing to promote new ideas. The EU FLEGT VPAs have the potential to preserve ecosystems via trade, but there is still a long way ahead.